Holten…good preparation for the EJK in Lithuania 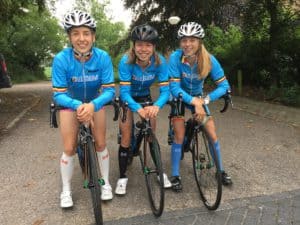 On Saturday July 1, Cato Cassiers, Lisa Isebaert and Hannelore Willen participated an ETU- in Holten. For Lisa, it was the first race at the international level.

Cato came out 8th after the swim test. After a strong T1 Cato joined the head group in biking. Lisa and Hannelore came out after T1 approximately one minute later, heading for 20km biking, with one steep hill in the parcours, the Moutieweg, a steep slope of 700m with an average of 7%. Especially this slope was a true test for Lisa. Due to mechanical problems, Lisa could not switch her chain and lost the connection with her biking group. Hannelore could easily nest in the group just like Cato. Only the top favorite and a compatriot split from the rest and took head of the race. Cato started around 10th position at the finishing discipline, Hannelore started running about 2’30’’ later. Lisa was forced to keep pursuing the rest due to mechanical bad luck. Cato finally ended in 16th place, and 3rd Belgian. Hannelore could take the 22nd stitch after a strong first run and a penalty she had to sit out, unfortunately. She became 4th Belgian. The 38th place was for Lisa.

After a difficult exam period, this competition was mainly a good preparation for the EJK in Lithuania (mid July). Cato and Hannelore will participate at this event. Lisa will show her forces next Sunday July 9th at the BK Sprint in Vilvoorde. Good luck!