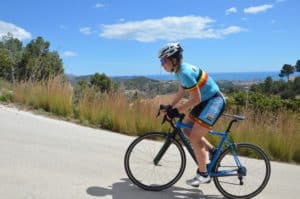 After Tiszaujvaros and Panevezys, Cato Cassiers was able to qualify for the third consecutive time for a European Championships.

After a hard swim, Cato came out the water around 15th position. The run to the transition area was long and steep, which was not in favor for Cato, but she did her best and could minimize the time loss. After the transition she tried to close the gap and make connection with a big group in front of her. After a hard fight with herself (and a short, steep hill) she established the connection. Yes! But one lap later, pitifully, Cato got involved in a crash just before her. She instantly jumped back on her bike, but some mechanical issues caused some extra delay and the big group was gone. In a small group of 6 athletes, Cato and a German girl had to do all the work, not that easy on a hard bike course. In the last discipline Cato could not show her best feet due a little injury in her ankle and the extra effort on the bike killed her. She finished disappointed the race on a 45th place.

2 days after her individual race and after some good rest and physio, Cato could participate the Junior Mixed Team Relay. Cato went first, Tom second, Elise third and Rik was the last one for team Belgium. This time everything went well, and Cato did a good job! After a short but very intensive race Cato could launch Tom in 8th position. Tom, Elise and Rik also gave everything and after a strong finish, Team Belgium could secure a top-10 spot.

Congratulations Cato, the other athletes and the coaches!