On June 16th Hannelore will defend the Belgian colors! We wish Hannelore a lot of success and we will wave the No Limit Flag all the way to Austria.! 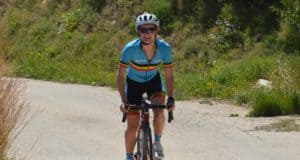 Just one week after the race in Tartu, Cato Cassiers had another appointment with the European stage. Tabor (Czech Republic) was the place to be. This time, Cato wasn’t alone for No Limit Team, Lotte Vandekerckhove also made the transfer to Tabor for her fist experience in an ETU-Cup race. After another hard swim, Cato […]

This year, Tartu (Estonia) hosted the European Junior Championships Triathlon. After Tiszaujvaros and Panevezys, Cato Cassiers was able to qualify for the third consecutive time for a European Championships. After a hard swim, Cato came out the water around 15th position. The run to the transition area was long and steep, which was not in […]

The final in Panevesys was very hard

Mid July Cato Cassiers and Hannelore Willen participated in the EK Youth Championships in Lithuania (Panevesys). Hanne Peeters was the 3rd female athlete for Team Belgium. The race was split up in 2 parts, with sprint distances (other than “normal” Youth A distances). On Thursday July 13th the semi-finales took place, in 3 different races. […]

Holten…good preparation for the EJK in Lithuania

On Saturday July 1, Cato Cassiers, Lisa Isebaert and Hannelore Willen participated an ETU- in Holten. For Lisa, it was the first race at the international level. Cato came out 8th after the swim test. After a strong T1 Cato joined the head group in biking. Lisa and Hannelore came out after T1 approximately one […]

On Saturday July 1st 2017 3 NLT-athletes will enter the ETU Junior Women Race in Holten (Netherlands). For Lisa Isebaert this will be her first ETU experience. Cato Cassiers and Hannelore Willen will join her. In total 7 Belgian femal athletes will compete against each other and against their own limits. We wish everyone lots […]

On Friday June 16th Hannelore Willen participated in the individual EK Junior Women race in Kitzbühel (Austria) together with Laura Swannet and Kiara Lenaertz. The pace of the race was set as from minute 1, with 60 athletes fighting for each meter in the Schwarzsee. After a 750m swim Hannelore came out of the water […]

Partner in the picture